Menu
"Jodi Waseca... hobo, business man, gorilla, vixen, patriot, zombie, these are only a few of the characters you might see at a Jodi Waseca performance. Underneath this is impeccable dance technique with a broad range of vocabulary that only comes from years of dedication to one’s art. I have watched Jodi rivet audiences far and wide, always leaving them wanting more. A true artist!"
~TerriAnne Gutierrez 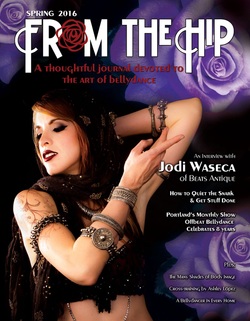 Jodi is a well known performer, dance workshop instructor, troupe coordinator, art model, stage manager, and event producer.  She was a core member and toured regularly with the band, Beats Antique as a featured dancer and crew member (wardrobe mistress and assistant tour manager) from 2013-2016. Jodi is  the house manager as well as a performer with the Hubba Hubba Revue, moonlights with the Vau De Vire Society in San Francisco and Cirque Berzerk in LA, and was the featured artist in the May 2016 issue of From The Hip magazine. She is an award winning performer; she is the "Queen of the Roses", as crowned by the 2017 Oregon Burlesque Festival, took   the coveted "Keepin' It Weird" award in the 2016 Oregon Burlesque Festival, and was the first runner up in the 2018 Shimmy Showdown improv burlesque competition and the 2017 Miss Exotic Oregon Competition. Jodi is also the 2010 Breakthrough Fusion Dance Solo Artist winner (San Francisco) and was first runner up for 2011.


In addition to performing in numerous varied projects, Jodi also devotes her time to the production end of show.  She is the producer of Burlynomicon-a darkly decadent burlesque revue which happens every 2nd Tuesday at the Lovecraft Bar in Portland, OR.
She toured with Beats Antique for 3 years as a featured dancer, assistant tour manager and backstage manager.   Jodi was assistant director of Zoe Jakes' House of Tarot project (2014) as well as being a guest performer in the project.
She is online show manager, stage kitten, and performer with the SF burlesque show voted one of the top 10 in the world,  Hubba Hubba Revue.
Jodi produced and emceed a variety show in Sonoma County, Ca, called Risk-A Cabaret, and was a co-producer of the "original and still one of the best" (SF Bay Guardian's Club Action edition) neo punk nights in San Francisco, Baxtalo Drom-the Lucky Road.  She was co-producer of one of Northern California's fall bellydance festivals, the North Bay Bellydance Bazaar.
She has owned and directed her own dance studio, where she taught all age ranges and different styles of dance, and was the hip hop dance director for S.P.A.C.E (School of Performing Arts and Cultural Education) in 2003-04.
Jodi traveled to Guatemala City with Joweh! in 2010 to perform and teach as the featured Tribal Fusion dancer, and traveled all over the country in 2017 with her Aqua Teen Hunger Force signature burlesque act.

Jodi is involved in Faust Productions' TRIPTYCH: Journey Through Cancer short films as a featured dancer.


Jodi is a professional fire performer with a strong ethical lean towards safety and beauty. She created an instructional fire performance, safety, and tool construction online tutorial with World Dance NY that can be found here.

Jodi continues her studies of contemporary and Cabaret style bellydance, Modern/Laban-Bartenieff Fundamentals, as well as touching up on dance and movement techniques with weekly Ballet, Feldenkrais, Modern and Yoga classes.  She takes any Butoh class that comes her way, most recently with Ximena Garnica at CAVE in Brooklyn, NY.  Feeling as though inspiration for movement comes in many forms, Jodi finds beauty in music, in the macabre, in the unknown, and in the flow of nature.


Jodi is available for many types of performance and instructional opportunities; from silly to strange, burlesque to bellydance, and all stops in between! Lets play!


Get ahold of the lady behind the fancy words here!